Following is an older snippet involving my World of Warcraft characters, Kalshen (kaldorei hunter) and Lesara (kaldorei priestess).  I abandoned this particular story thread shortly after creation.  I thought it’d be fun to post it anyway.

Ripples danced around the bobbing fishing line, but the biting fish went ignored.  “Thought I might find you here.”  Lesara’s affectionate smile almost coaxed one out of her older brother.

“Someone needs to help Dad.”  Kalshen wrinkled his nose at the heavy, pungent scent of medicinal herbs.  “Work in the temple gardens again?”  He began reeling in his line.

He simply nodded, once, as he baited his line and cast it back into the lake.  “What is it?”  He went back to watching his line.

“Isn’t this a better job for Dad?”

“Leg’s bothering him too much.”

Silence.  From the corner of his eye, he saw Lesara looking skyward.

“You should be minding the sabres.  I can do this.” She looked back to him and stretched out her hand.

Grunting, he handed it over.  “I should be looking for Shenara’s father.”  He gave her an even glare and she looked away.

“The Goddess’ child,” he finished for her; a frown set deep in his features.  “Ta.”  His expression softened.  “Is she the goddess’ child because of ritual, or because he ran off?”

She stiffened, turning her back fully to cast the line again.  He heard her sigh just before her shoulders sagged.  “He didn’t run away.”

“Then where is he?”  He gestured to the empty air and looked around.

She eyed him over her shoulder before turning her attention back to the line and reeling in a small catch.  She unhooked it, tossed it back, baited, and cast the line again.  “I don’t know.”  The briefest of pauses before she followed up with, “But he didn’t run away.”

“You’re young, he wasn’t ready for the responsibility, it happens.”

The tight and firm reply, coupled with her straightened posture told Kalshen to drop it. It was the same voice and manner she adopted when filling her role as family matriarch. “Then he’s in trouble, I should still go find him.”

She shook her head.  “Go see to the sabres, Nia needs your help.”  She waved, dismissive.

“Nia always needs help.”  He turned to go.  Grunting, he grabbed and slung his pack and then his bow over his shoulder.  He pushed aside some leafy branches and headed into the trees behind them.  “Someone needs to look out for you and Shenara too.”  If she made a reply, it never reached his ears. 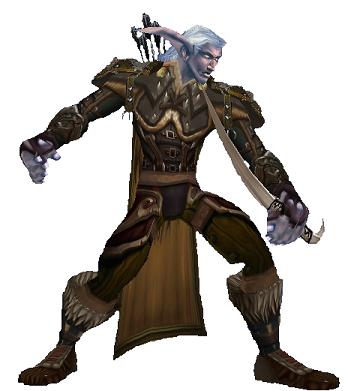 Of Oaths and Familiar Faces

I'm an eclectic amalgam of confusingly combined oddities. PS If I liked your post it means I really liked your post. You don't have to visit back, but it would be nice. Either way, I read it because I wanted to and liked it because I did. I don't do the fake like for returns thing :)
View all posts by Saronai →
This entry was posted in Muse Sings, World of Warcraft and tagged entertainment, family, fanfic, fantasy, fiction, gamefic, kaldorei, reading, world of warcraft. Bookmark the permalink.