…you want to see.  I lost a whole lot of sleep last night and ruined my sleep schedule because once asleep, I didn’t want to wake up to this world just yet.

It’s not just the events all over US news of sad events both here and overseas (22 children in China were attacked by a knifeman).  Regardless, something from this cemented a change I want to see.  For a long while now I wish the news would focus on reporting the world as it is, not for ratings or profit; sensationalism.  Violence rampages frequently, yes, but I believe everyday acts of kindness and compassion are more widespread.  Our news slants it toward violence; violence sells.  What’s more, the victims and heroes involved are quickly turned to faceless masses and statistics.  The spotlight shines on the depraved killers.

I disapprove of shoving a camera and interviews down the throats of victims as they try to sort through the fear and grief while processing the horror.  However, when prepared, when ready, the spotlight should shine on them while the depraved fall into anonymity, their details only known by professionals who sort them together for profiling and preventative purposes.

I want to hear more about the victims, the heroes, officials on the scene far more than the villain.  Today, I want to spotlight one such hero I keep seeing on facebook.  Not the best of research tool by far, but even if she’s not real, she represents a type of person that is very real.

I want to see stories on her, I want to know the people I am grieving, and not just because they are from the US, like me (I want to see such stories focused on all innocent victims as friends and family feel prepared to come forward with them).  This post is dedicated to a hero by the name of Victoria Soto (verified). 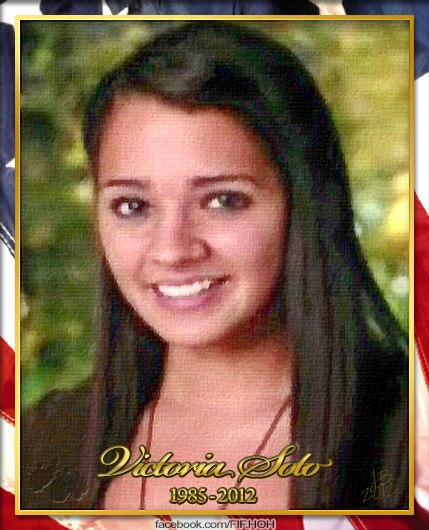 Her story goes that she is (quite obviously) the young teacher of the second classroom hit.  As soon as she heard the gunshots this brave woman immediately went into action and hid away every child in her classroom in the closet and cabinets.  Then she stayed out in the open as a shield to prevent him from looking for hidden victims.

The story goes that she simply stood out in the open to prevent him searching for hiders, or that she blatantly said her kids were elsewhere before she was gunned down.  Either way, without her quick thought and action, an entire classroom of first graders would be added to the tragic deaths.  She gave her life for her kids, our kids, and bravely faced the danger to save them.

This story is full of people I want to know better.  I hear the principal and school psychologist ran toward the gunfire as well; hiding far from mind, worry for children at the forefront (unverified).  Let’s talk about them.  This time, let their names be household while the villain fades into a faceless statistic studied privately by professionals in the interest of prevention.

Morgan Freeman added something moving to this effect as well (according to Facebook, anyway; unverified, but still applicable):

“You want to know why.  This may sound cynical, but here’s why.

It’s because of the way the media reports it. Flip on the news and watch how we treat the Batman theater shooter and the Oregon mall shooter like celebrities. *[They] are household names, but do you know the name of a single *victim* of Columbine? Disturbed people who would otherwise just off themselves in their basements see the news and want to top it by doing something worse, and going out in a memorable way. Why a grade school? Why children? Because he’ll be remembered as a horrible monster, instead of a sad nobody.

CNN’s article says that if the body count “holds up”, this will rank as the second deadliest shooting behind Virginia Tech, as if statistics somehow make one shooting worse than another. Then they post a video interview of third-graders for all the details of what they saw and heard while the shootings were happening. Fox News has plastered the killer’s face on all their reports for hours. Any articles or news stories yet that focus on the victims and ignore the killer’s identity? None that I’ve seen yet. Because they don’t sell. So congratulations, sensationalist media, you’ve just lit the fire for someone to top this and knock off a day care center or a maternity ward next.

*Names omitted from the quote as I wish to omit them from remembrance.

I don’t know about you, but I think Victoria is a much better name to enter my household.  What she stands for, a more worthy focus for those of us without the training and assignment to preventative studies on the event.  I want to learn far more about her, when her family and friends are ready to speak.

I want to sign off with a quote from a man whose show I always found boring, but what a powerful and uplifting quote:

“When I was a boy and I would see scary things in the news, my mother would say to me, “Look for the helpers. You will always find people who are helping.” To this day, especially in times of “disaster,” I remember my mother’s words and I am always comforted by realizing that there are still so many helpers – so many caring people in this world.“

I'm an eclectic amalgam of confusingly combined oddities. PS If I liked your post it means I really liked your post. You don't have to visit back, but it would be nice. Either way, I read it because I wanted to and liked it because I did. I don't do the fake like for returns thing :)
View all posts by Saronai →
This entry was posted in Memory Monday, Muse Sings, Random Extras and tagged Connecticut, hero, heroism, people, remembrance, tragedy, violence. Bookmark the permalink.