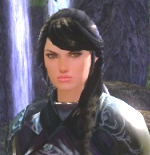 Lines by Zombie Cat. Click the picture to view her Deviant Art

Appearance/Mannerisms:  Her mood is difficult to read as her expression is usually a careful mask of neutrality. Her posture and movement is fluid, suggesting a relaxed and unworried state.

She appears as she is in-game with one exception, the pony tail is actually a thick braid that stretches just past her hips.  Generally Native American in appearance, with a bit of an unfriendly look to her.

Her scent is mostly indiscernible from the outdoors, but those with stronger senses of smell might detect the earthy undertones of morrowgrain in specific. She habitually chews on the end of a morrowgrain stalk the way one might smoke from a pipe a few times a day.

History:  Only one person knows much about the real Gida and her history and she set sail for uncharted lands a year before Deathwing’s cataclysm.  You may find fragments out from other people, but not much to go on.

She carefully cultivates a lack of reputation, though those who’ve actually met her outside of a job might describe her as cold and aloof.

Her death was ordered after she pulled a Xanatos gambit to expose a rather influential lord.  Having something of a reckless death wish for a while, she risked discovery to take down this lord successfully.  If he was defeated, it was another successful mark.  If not, she would use herself as bait and force the lord’s hand.  If she survived, she could fake her death, if she didn’t, his move would cause his own downfall after her death.  Officially on record, it was this last that happened.

Work Style:  Gida pairs her gift for impersonation and mimicry (occasionally bolstered with alchemical potions) with her intelligence to take down her marks from the inside, often pushing them in several little places as random, overlooked people (such as an old servant woman) until they end up causing their own downfall.  She also uses several different disguises to obtain as much information as possible before coming up with a plan and revising it as needed.

Notes: I play Alasgida as a few different

characters. Keep an eye on outfit and MRP changes for who I’m currently playing her as. What this means is, if you meet Gida, you won’t then recognize her as Gida when meeting Talon and vice-versa.  Considering Gida’s status is currently listed as dead (as of the cataclysm), it is quite unlikely you will meet her.

Alasgida may never make a reappearance as the core personality of the character, despite carrying the name still.  It depends entirely on whether or not Blizzard fixes her face to my satisfaction.  So, please, do not roleplay as though you know this side of the character is there.  Her primary talent is impersonation and she is very thorough altering vocal pitch, scent, mannerisms, accents, contouring make up, and more tricks in her arsenal.

She’s been at this for decades and is rather practiced (she is older than she looks thanks to a previous RP story line’s results).  Besides, if Blizzard never fixes her face to my satisfaction, then Lynn/Talon will be an actual character rather than just an impersonation.  This is also why she’s primarily represented in the images from GW2 which comes the closest to looking like her than any other version.

Tonantzin Carmelo, courtesy of IMDB photos. Click to view her profile there.

Count me Out (Gida on Valentine’s Day)

Had Enough (Another character song entry)

Stand in the Rain (Another character song entry)

Broken Pieces of Me (Sorta)

I'm an eclectic amalgam of confusingly combined oddities. PS If I liked your post it means I really liked your post. You don't have to visit back, but it would be nice. Either way, I read it because I wanted to and liked it because I did. I don't do the fake like for returns thing :)
View all posts by Saronai →
This entry was posted in Muse Sings, World of Warcraft and tagged characters, fantasy, gamefic, Profile, roleplaying. Bookmark the permalink.