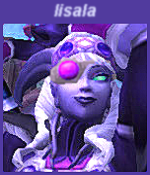 Corresponding Story Title:  None yet

Theme Song:  No Parallels by Hands Like Houses
But also… Time’s Scar by Yasunori Mitsuda (yeah, same as Lesara, but I LOVE this song and it’s even more suited to Isa)

Voice:  Warm alto with only the hint of a draenic accent in common and orcish (less so in orcish/more practice).  Basically, Nicole Beharie with a slight slavic accent.

Scent:  Nothing in particular, except for maybe open air

Appearance:  Pretty much as-is in game. Metal accents on her gem-inlaid eyepatch are silver, not gold. Likewise, the decorative bands on her tendrils and tail are silver.

Her hair is naturally curly (it’s a fantasy game shh) and may be frizzy or wild if it’s been rainy, she was training, similar things that mess hair up.

In the way common to draenei, she prefers mixing art and culture in with utility and science. As such, her decorative armor is sturdy and protective.

Covered eye is actually missing/scarred over and she has a large jagged scar on her left shoulder (provided she’s actually in something that shows off her shoulders).

She has an expressive face, easy smile, and personable attitude.

She wears two rings on her right ring finger.  Both are of a simple silver band, one is set with a purple gem.

Yes, I do hope she’d be this happy with the part.  Shut up!

Mannerisms:  Easy going, easy smile, personable, and though she shares the same aversion to demonkind and warlock magics as the rest of her people, she’s generally more accepting, even curious about different people and their cultures and languages.  As such, unless a warlock or demon are nearby or being talked about, she generally has the mannerisms of someone who’s paying attention to those around her and genuinely interested in their viewpoint.

She touches the underside of her chin with the back of her fingers a lot while she thinks, may even tap it like that if she’s agitated, nervous, or excited.  She will also press her lips together, sometimes licking them first, when waiting to say something or holding/biting her tongue.

Work Style:  Diplomatic and fair-minded approach.  She tends to work at overcoming her own biases, even with people who make her uncomfortable.  Often relegated to positions in need of mediation and field work as she prefers missions that send her afield  where she can learn about new sorts of people.

Personality:  Free-spirited, caring, and curious person.  She tends to be almost wildly independent, but also empathic.  She doesn’t put a whole lot of store in tradition nor give to societal pressures on how she should act or think, even if that leaves her more friends among the outside races she befriends than with her own people.

She will fight for the people she believes in and stand up for them as well as standing up to them if she believes they’re wrong, on a harmful path, or need someone to push back.

Skills:  Healing, swordplay and wielding the light as a weapon, empathy, diplomacy, mediating, speaks common and orcish in addition to draenei and other languages from peoples before draenor (though skills with those decay with no reason to practice them), anthropologist, survival, communication, observant

Living Family:  The last she saw any of her family, in both realities, was when she was tricked into leaving without her daughter (only a few years old), Sagara (Suh-GAH-ruh)back on Argus.  They are all manari by now, as both parents, husband, and daughter stayed behind.

Religion:  Nontraditional  Light worship.  More spiritual than religious.  Unlike many vindicators (some of which are friends she’s been known to argue with about it), Isa solely believes in the light as life itself, in all forms.  She sees her love of freedom, which makes her feel most alive, as a form of worship, making adventure a living practice and living life to its fullest, connecting with other life forms, all crucial ways of following the light.

History:  Alternate Draenor timeline.  Isa had a relatively simple life back on Argus, getting married rather young and having her first and only child, a daughter named Sagara, within only a few years.

When the time came to leave, Isa’s husband tricked her into leaving alone, without him or their daughter.  She spent the next several thousand years training as a vindicator and gladly taking field missions, getting to know and cataloging local species whenever they found a new planet.  Both out of a keen interest and curiosity as well as a need to get off the ship and away from other draenei and their reminders.

It was on one such mission that she encountered a team of other draenei having a hard time with a local species of aquatic people.  She lent her services to their commander, Telurin, helping the team work with the locals for their goals.  Afterward, she was formally invited to join the team and accepted.

Over the centuries that followed, they became like a second family for her.  Quite recently, while she was away on one of her field missions, the entire team save the grandfatherly anchorite, Belaar, and his lover, Sio (who were in Karabor at the time), died in the legion invasion on Shattrath.  She lost her right eye in a skirmish with demonic outriders a few hours flight away, close enough to see Shattrath burning on the horizon.

Currently she remains close to Karabor for Belaar’s sanity, but also for the unexpected arrivals of some of those she lost, from an alternate (the original) timeline, plus a few, beloved extras in the form of alternate Telurin’s grown children, who did not exist in her timeline.  Though her old commander is a death knight now, rather than a vindicator, she still has trouble not thinking about each one as her team.  A fact that had her more curious about these ebon knights than wary and led to her current relationship with another former vindicator named Kadaan.

Tattoos/Markings:  Packed and closed-over scar tissue where right eye should be (which she keeps covered with a gem-inlaid eye patch at nearly all times, or a soft cloth one when sleeping), and a jagged scar on her left shoulder.

Notes:  Even while Isa shares her people’s aversion to demons and warlocks, the fact that she lost her daughter to them when the girl was only 4 or 5 also makes her curious, primarily, if whether the light and love could save such people.  This has caused her to take some nervous interest in certain people the draenei would shun.

Also, I’ve no evidence in Warcraft that Fey drakes are like the other dragons.  I AM interested in the idea, but I have been playing it as though the fey drakes are a bit more mischievous and haven’t let on that they’re not just a dragon-like species and actually have the same intelligence and capabilities of “true” dragons.

Character Inspirations:  At first, no one really, but now that I picked an actress to play her, she’s a bit inspired by Nicole Beharie’s personal mannerisms I’ve caught in interviews.

Nothing specific, but we can talk about it!

*Outside art has credit under the associated pictures already
*I do not own World of Warcraft, Blizzard does.
*I do not own the Nicole Beharie interview gift
*Chibi Isa by Suesanne.

I'm an eclectic amalgam of confusingly combined oddities.
View all posts by Saronai →
This entry was posted in Muse Sings, Random Extras, World of Warcraft. Bookmark the permalink.